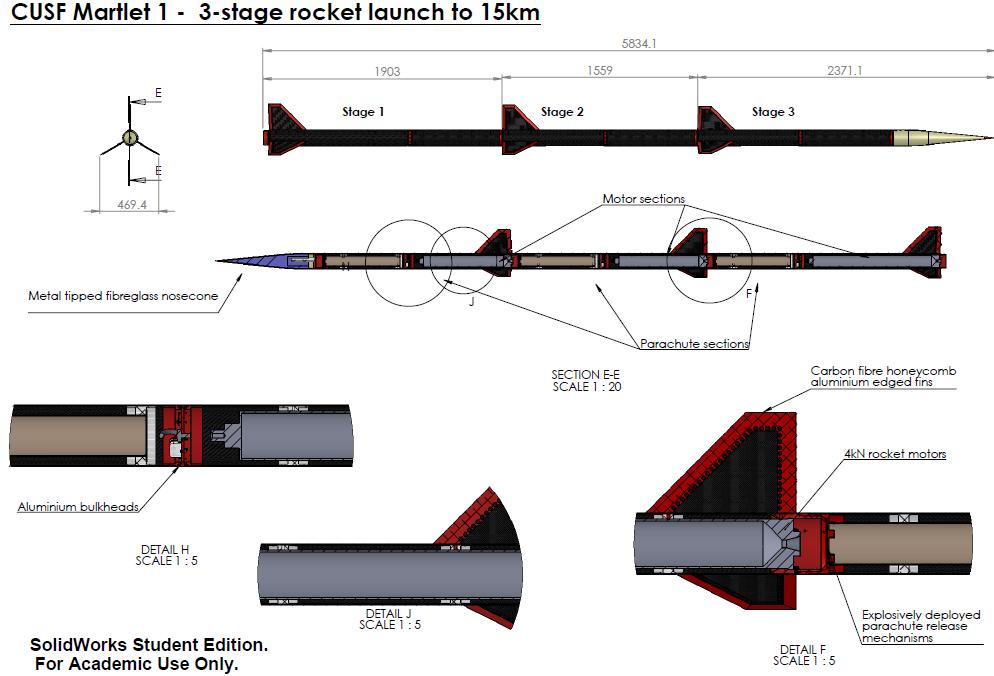 We’d like to thank our generous sponsors for their support, without whom this project would not have been possible:

Two stages of the Martlet 1 sounding rocket were launched at Ben Armine, Scotland, on the 3rd May 2012, as part of  The Big Range 2012 launch campaign. The rocket was preliminarily prepared at the Ben Armine hunting lodge, before being transported 2km for final preparations in a marquee at to the launch site. 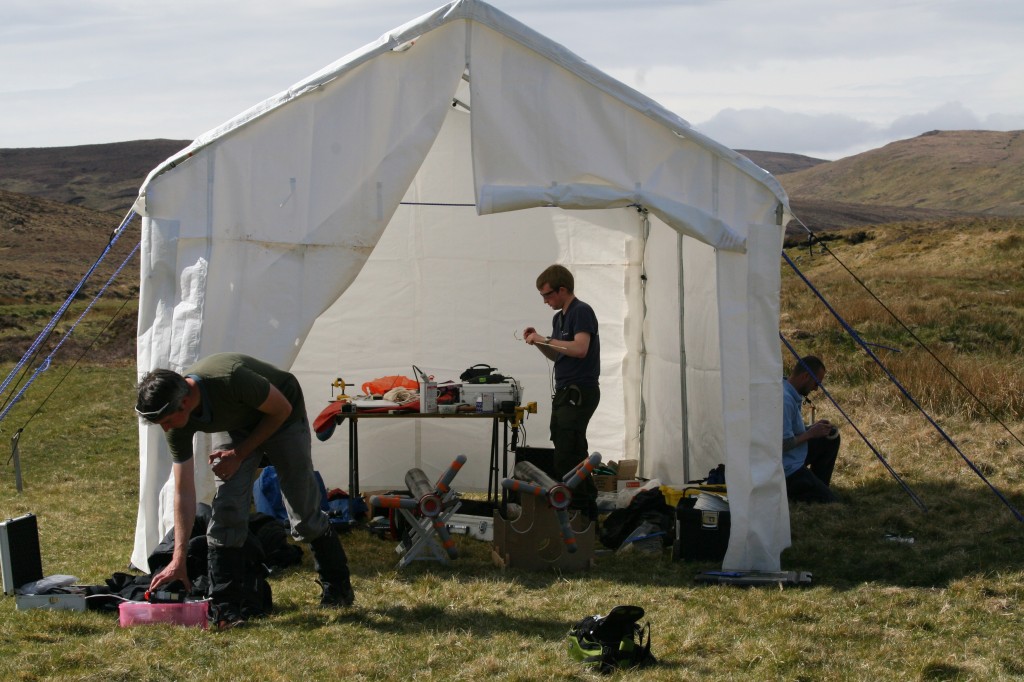 The rocket was loaded with the motors and the two stages assembled onto the launch rail. 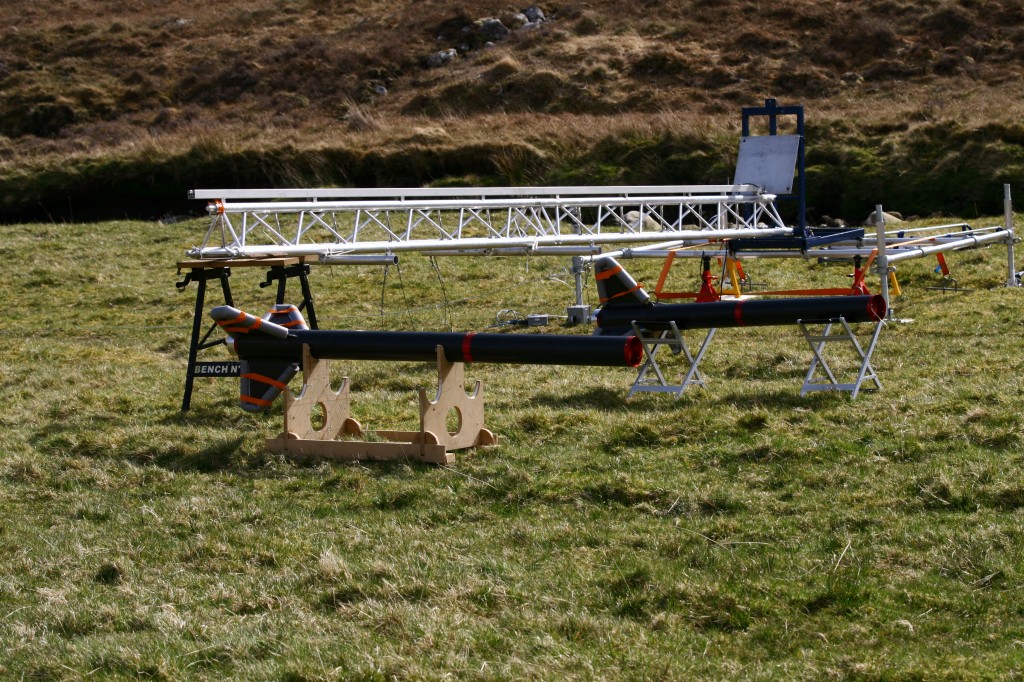 The launch rail was then raised into position and secured with steel guy ropes.

Once on the launch rail, the area was cleared of spectators and the igniters prepared for the first stage. 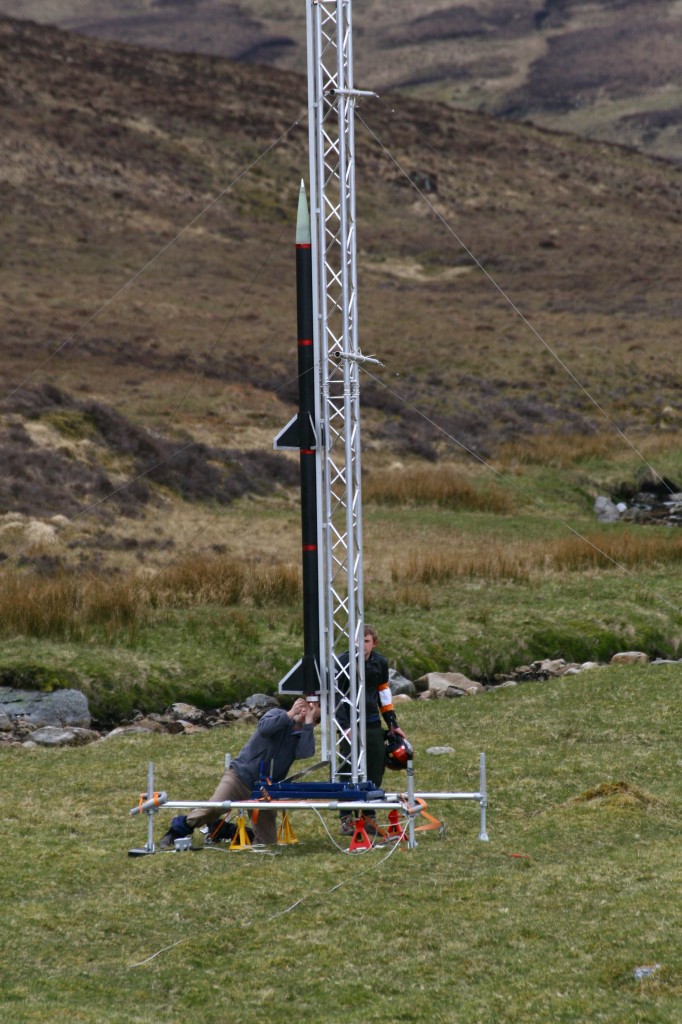 The first launch attempt was made on the 2nd May 2012. The skies were bright blue, the winds were low and rocket was prepped and ready to go. There was a misfire of the first stage rocket motor, however, and the motor spat the igniters out of the nozzle before the rocket motor had properly lit. At this point we were right at the end of the 1 hour window that the CAA had granted us, and there were already planes on the radar, so we had to stand down and disarm the rocket.

Undeterred, we re-prepared the rocket on the 3rd of May, complete with a new set of igniters. Our thanks go to The Dutch Rocket Boys for all the help and experience they gave during igniter preparation. We prepared the rocket in bright sunshine with clear blue skies, but one hour before launch, a weather front of clouds covered the skyline.

The rocket was fired from 300m away, to give a safe distance between us and motors of that size. The rocket took a while to ignite, before a furious roar as it disappeared through the clouds. 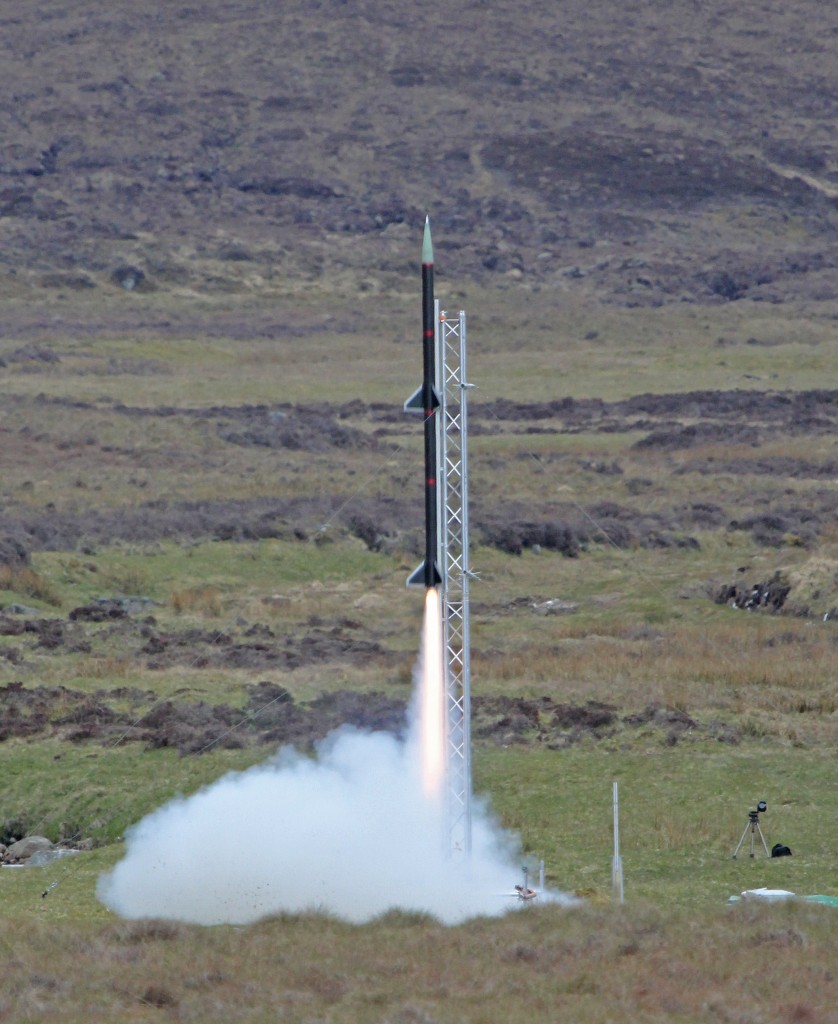 In the 2-stage configuration, Martlet 1 is designed to fire its first stage motor for 5 seconds, then coast for 9 seconds, then the stages separate and the second stage motor is fired. After the first stage motor fired and the rocket disappeared through the clouds, we mentally counted the 5 second burn, then the 9 second coast, before an awkward and nerve-wracking silence when we expected to hear the second stage fire. After another 11 seconds we heard the popping sound of the separation and the second stage light. What none of us had prepared for was the fact that at separation, the rocket is over 3km away, and it took an extra 11 seconds for the sound of ignition to reach us.

High speed footage of the launch shows the rocket motor taking a whole second to begin to produce thrust. The igniter lights the starter grain, then the motor pressure and temperature build up before the nozzle chokes and the rocket motor exhaust goes supersonic.

To give an idea of the power of the first stage motor, see the following photo of the blast deflector plate on the launch rail. This is a 4mm thick, flat aluminium plate, that is mounted 400mm below the base of the rocket, at 30 degrees to the horizontal. It is designed to stop the motor directly contacting and burning the ground under the rocket. After the motor had fired, the 4mm plate had completely deformed down onto the base frame. 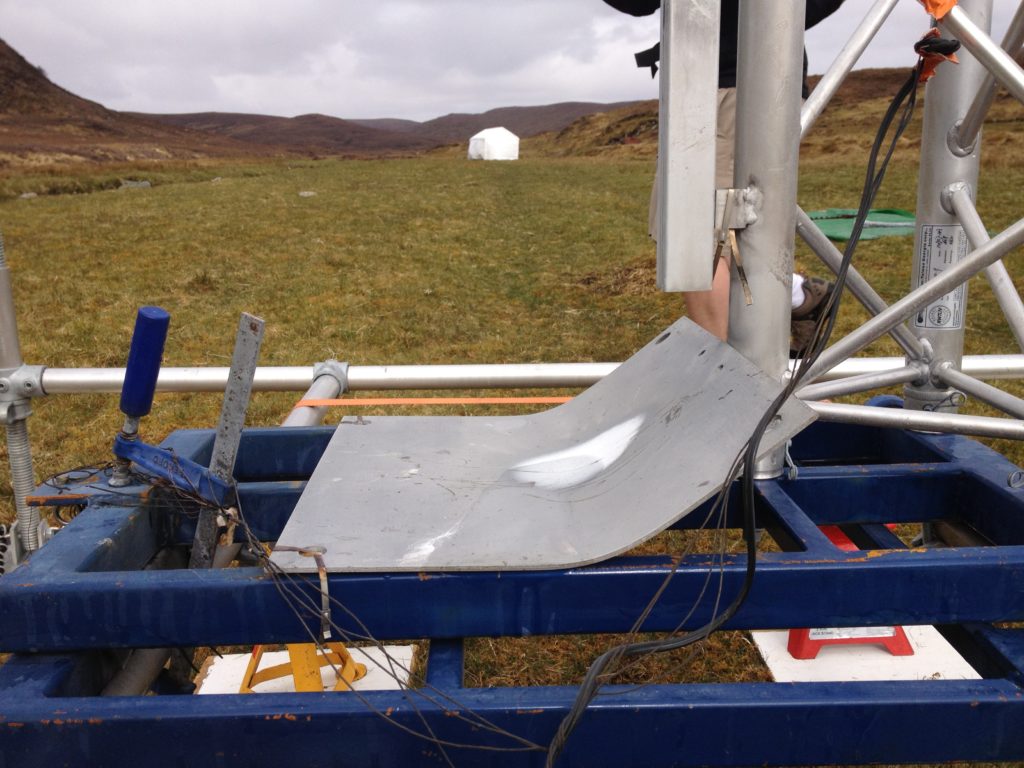 Another camera was placed at the top of the launch rail itself, to show the rocket leaving the rail. The 2-stage configuration of the Martlet 1 rocket weighs 35kg at launch, but leaves the rail with a roar. Make sure to watch the following video with sound.

We then began to franticly track the rocket stages as they flew through the air. Both stages were equipped with GPS trackers that downlink via radio on the 434MHz band. Tracking was a nightmare however, as the frequency we received had a huge Doppler shift due to the speed of the rocket. Because the rocket had disappeared through the clouds, it was also extremely difficult to keep the directional antenna pointing in the direction of the rocket, and we soon lost it as it disappeared over the visible horizon. 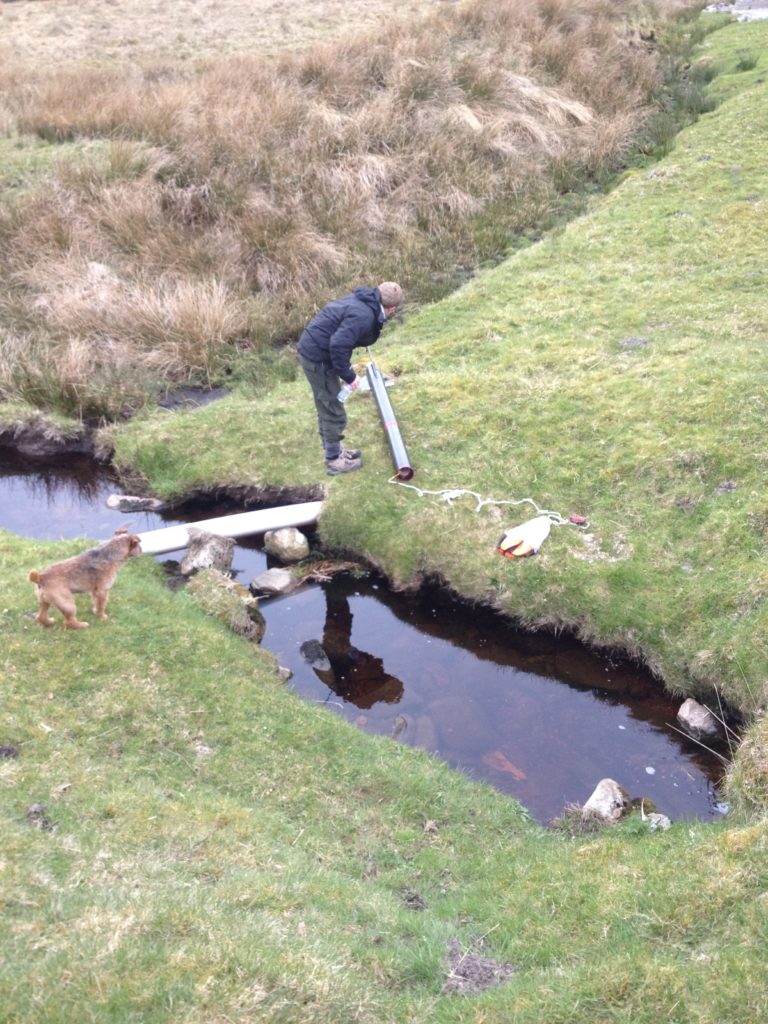 Without a decent tracking direction for the second stage, we had to make some educated guesses as to the likely flight path. We spent the last two days of the launch campaign  trekking over 40km through the launch range, through bright sunshine and through horizontal rain, sleet and snow. Despite searching over 60 square kilometres of the range, the second stage is still missing in action (presumed awesome). We just hope the gamekeeper finds it soon……