Both the drogue and main parachutes were bought from Fruity Chutes and modified for better deployment. The drogue parachutes are 12″ in diameter, and we have added two features: (1) Nylon netting around the parachute lines, which means that it is now impossible for the drogue parachute lines to tangle. (2) A 50mm diameter spring has been sown into the centre of the drogue, and sown into a netting sock to keep it straight. The spring has two purposes, to keep the drogue stretched and inflated, and to jump out into the airflow when it is deployed. The drogue is packed into the rocket behind an aluminium cap, and the cap is restrained by two plastic bolts. To deploy the parachute, the plastic bolts are sheared by an explosive protractor, and the spring makes the drogue jump out of the rocket into the airflow. 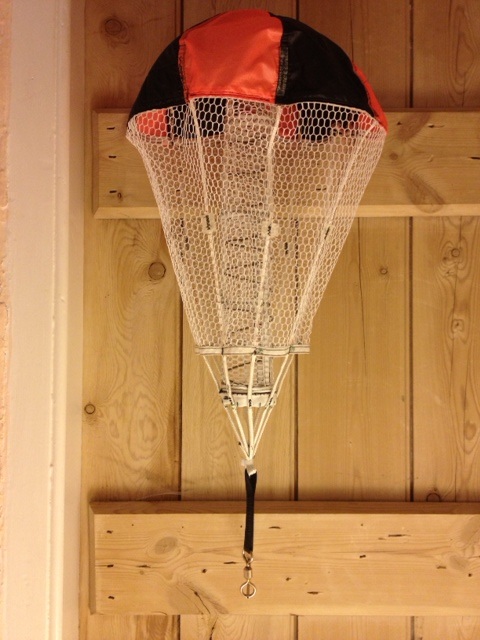 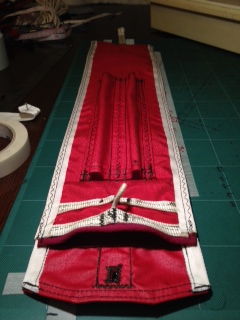 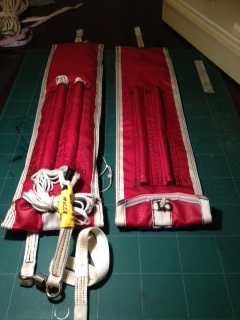 The deployment bags are made of red Cordura nylon, and white nylon tape. The inside of the bag is coated with polyurethane to reduce the friction when the parachute pulls out. On one side of the bag there are two tunnels for the parachute lines, on the other side there are five tunnels for the larger nylon tape that runs from the base of the parachute to the rocket. The parachute lines are folded into a U-shape, and the bend of the U is pulled through the tunnel (as shown on the left of the bottom photo). When the bag is deployed in the airflow, the lines start to go taut and then pull out of each tunnel in turn, then pull the parachute out of the bag. In this way the parachute and lines are fully stretched out when entering the airflow and will deploy without tangling.