The stainless steel stencils manufactured by Hackvana arrived today. Parts will be ordered soon ready for getting at least one board manufactured and running in the coming week.

Some pictures of the stencil: The PCBs for the second revision of the Joey-M flight computer have arrived from Cambridge Circuit company. This revision carries some minor fixes from the first as well as the addition of the new CUSF logo to the rear silkscreen. Thanks once again to Cambridge Circuit Company for these fantastic boards. NOVA21 went up at around 1330BST carrying JOEY-M, Squirrel (the Android project) and a special guest. It got to 27.2km altitude before burst, landing near Braintree.

The flight was mostly a test of the new Joey and Squirrel flight code. Joey performed well, though there was a lot of interference on the 433.8MHz frequency it was using, so later revisions will swap to a higher frequency. Squirrel was great up until around 8km when for a yet-unknown reason the flight software cut out, which meant the radio and camera were disabled. However, after landing we were able to reactive Squirrel remotely, getting some tweets of photos from the field it was in and its GPS position. The payloads were recovered successfully. NOVA22 launched at around 1500BST carrying Wombat along with ASTRA from the University of Southamption with an experimental HF transmitter on 27MHz and a balloon neck flight computer with a differential pressure sensor to log the balloon’s pressure.

NOVA22 reached 21km before burst (on a smaller 350g balloon) and landed close to NOVA21. Wombat worked much better than on NOVA20, being successfully decoded by many people in the listener network. ASTRA’s experimental radio also worked, though unfortunately the payload lost GPS lock for a part of the flight. The balloon neck flight computer was a success, getting back valid pressure data for the balloon. We also used for the first time the excellent F-203AV mass flow controller (kindly on loan from Bronkhorst who support CU Spaceflight) for regulating the helium filling of the balloon. Radio transmission from Squirrel failed on launch due to what turned out to be physical damage to the connection between the phone and the NTX2 FM transmitter, but fortunately the payload was still able to be located with the SMS location tracking (landing in a field near Bishop Stortford – Google Maps). The balloon reached a maximum altitude of 22km, and a large number of photos and videos were captured – see the Squirrel 3 Flickr set for them all!

The Wombat flight computer was a test payload, and unfortunately had some difficulty keeping PLL lock during the flight, making it very difficult to track. We’re now refining the radio design for the next launch.

Here’s a video of the payload tumbling at around 22km altitude just after the balloon burst: Work has been progressing recently on the Wombat flight computer. While the original designs had been started well back in October, a few weeks ago we restarted the schematics with a view to a much more capable payload. 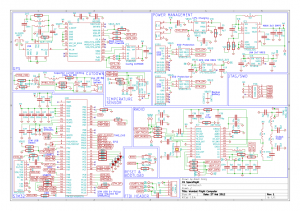 The schematics started coming together on the 18th Feb, and within a week were all finished and board layout began. A hectic weekend of designing part footprints and routing them together (all ~400 nets!) later, the designs for revision 1 were finalised at around 4.30AM Monday morning: 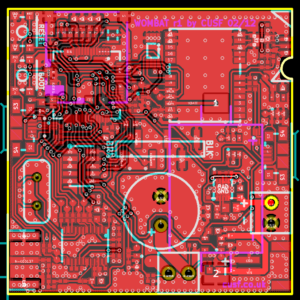 We sent the design files off to Cambridge Circuit Company who kindly agreed to sponsor the PCBs and promised to do their best to get them made as soon as possible. We also had some solder stencils made up and placed an order for all the parts from Farnell, fingers crossed that everything would arrive in time for an early launch.

Fast forward to Tuesday and seven parcels have turned up in the post and we’ve collected the PCBs, which are looking amazing: We wasted no time getting them soldered up and spent the rest of Tuesday evening, night and early Wednesday soldering, reworking and debugging our way through a number of small issues.

Perseverance prevailed and all the various subsystems started to work. The GPS was first, and thanks to the onboard USB we could test it right away. The STM32 (the microcontroller) had a few very tiny solder bridges thanks to our less-than-ideal paste application, but a bit of rework had this chip up and running, even if it wasn’t quite running code just yet.

Debugging the power supply took several more days as various issues were worked through, but eventually we realised the current limiting supply was causing it to lock in to undesirable state, which combined with a too-low-current inductor was causing all our problems. A quick part swap out later and the power supply was working fine. Meanwhile, the STM32 was hitting a hard fault every time it tried to start up. It turns out this was due to the linker script being told about 192K RAM, but actually the RAM isn’t continuous in address — 16K of it is off at 0x10000000, so the startup code was trying to load the stack pointer with an invalid address, causing the hardfault. Once we’d resolved this, code started loading and we could move on to the radio. Further fun was had getting the radio to start up — the PLL was not locking on to the correct frequency, despite coming very close. Significant pain later, it turns out the loop filter was not quite right for 434MHz operation — it could very happily lock at 400MHz all the way up to 433.5MHz, but no higher. Happily, 433MHz is still inside the ISM band, so we’re set on that front for now (pending a redesign of the loop filter — which happily just means swapping around some components). Now that all the hardware’s working, it’s time to get started on the software required for it to act as a basic flight computer, in advance of a potential launch this coming Sunday (weather permitting, of course!).

After four months in a tree in Exning, the Nova 19 payloads (Squirrel and Weasel) have been recovered thanks to the help of some local tree surgeons.

The Weasel payload with its Canon A560 camera took some stunning photographs.

The Squirrel Nexus One smartphone was also extremely successful, taking some excellent images and videos.

One of the current projects is to build a radio module to be a replacement for the excellent, but large and expensive, Radiometrix NTX2.

A first prototype uses the Micrel MICRF112 10mW FSK transmitter with a varactor controlled crystal pulling arrangement. An onboard variable capacitor also allows tuning of the centre frequency to anywhere in the LPD433 ISM band.

This prototype was soldered up today and is working well. We hope to develop this technique further to produce a cheap & reliable radio capable of MFSK and DominoEX as well as the standard 50/300 baud RTTY.

Filling was impeded due to very high winds and heavy rain showers, but eventually the payload carrying the Squirrel Nexus One smartphone and the Arduino tracker was in the air.

After beating the UK altitude record for high altitude balloons at 36206m, Nova 19 landed in a tree in Exning. We were unable to retrieve it, but stay tuned for the photos and videos when we get it back!

Today saw the launch of Nova 18, carrying the Squirrel smartphone and the Ferret Arduino tracker. Ferret has had some bugfixes since its last flight and seemed to perform much better this time.

The Squirrel smartphone was running a custom app called SquirrelPhoto enabling it to take pictures at set intervals. Unfortunately the software crashed at about 14km, but some excellent images were recorded up until that point.

Some work is planned for the Squirrel software and another flight can be expected soon, perhaps with video!